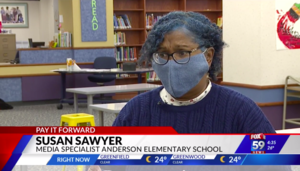 Sock drive collects more than 2,000 pairs of socks for The Christian Center

ANDERSON — Anderson Elementary set out to collect 2,000 pairs for its Socktober drive. When they fell short of that goal, one business stepped up to get them across the finish line.

On top of getting the socks for those who need them, the school also set fun incentives for some of the checkpoints along the way.  When they raised certain amounts, they got to do things like pie a teacher in the face, and silly string the principal. But the big one was to dye the coordinator’s hair… And thanks to this last donation they reached that goal.

Sawyer says she wanted to do the sock drive to show students they could help out.

“Every once in a while, I have a child who will come to me and say, ‘Mrs. Sawyer, I saw this homeless man, or I saw this woman sleeping on the curb, and I wanted to do something about it but I didn’t know how to help.”

They asked each student to bring at least one pair and set the goal of 2,000.

“I told the kids if you reach 2,000, I would dye my hair blue. And we got pretty close, and so I was fine with that, I didn’t have to dye my hair,” said Sawyer.

“What does he have against my hair?” Sawyer asked.

Owner Brad Mullins stepped up and donated the remaining socks and then some.

“Because when it comes for kids seeing their teacher’s hair painted purple, that I wanted to see,” said Mullins.

Sawyer came around and had her hair ready for his arrival.

As the students loaded up the last of the new donations, they are reminded of what they did it for.

“Just knowing they know they’re helping homeless people because a kid made a comment. They were like ‘That’s a lot of socks to help the people out there,’” said Becky Taylor with 765 Clothes.

The socks went to the Christian Center in Anderson. If you want to make a donation, you can find more information here.

This story was featured on FOX-59.